Growing up in small town Duluth, Georgia, I enjoyed living close to Atlanta. It was full of excitement and opportunity that I had read about in books. When I began to meet people after getting accepted as a student at The University of Georgia I included a reference to Atlanta being close to my home in all introductions. It was a source of pride for me. I feel the same way forty years later.

I think that Gwinnett County folks with deep roots usually tried to hold onto this pride of place. There are those who would swear that I am wrong about that. Atlanta was just down U.S. 23 about thirty miles, exerting enough of a magnetic attraction that no one could just ignore it. People divided into camps with what they thought about Atlanta depending on generation, business, political or religious identification. The geography alone required that people would always talk about the Atlanta and Duluth relationship. The talk ran from a hopeful Gwinnett cosmopolitan’s, “I live in Metro Atlanta,” to an informed and lamenting Atlantan’s, “Gwinnett is where they strip down the cars stolen from downtown.”

Close to two hundred years of change has altered the geography and society of Gwinnett County and the city of Atlanta. The changes have been all-encompassing and have touched every facet of society, economics and politics. The city has engulfed the county. I am intrigued to look at a family that has been present throughout this passage of time and enormous change. The family experienced generations of change in the city and the county.

Although, families were settled in Gwinnett and established roots well before Atlanta received its unholy baptism by fire, an aura of gentility did not soak into the county folks. Atlanta took on airs that it little deserved. It was about money, of course. Realizing an inevitable truth of social evolution, Atlantans chipped away at their brash, uncultured, cash and carry attitudes. As the city of Atlanta refined its image and the dollars aged, the farmers up in Gwinnett County seemed to be even farther out in the sticks than Atlantans thought.

Upstart Atlanta reinvented itself by acquiring culture. Fine homes were built in Housing
Estates or Developments. Parts of the city were built into neighborhoods that received the name of the land developer or the name of the family that had owned the farm. Streets were paved and wondrous trolley service began. Comprehensive schools were built and colleges chartered. The brother that had stuck with Five Points prospered and built a grand hotel. The Cotton States Exposition was built and attracted folks from out of the state.

Folks in Gwinnett County weathered the deaths of family in The War and in some instances met the enemy in their own homes. Farmers increased their land holdings, continued to sell cotton and produce and enjoyed large families and a peaceful society.

Kinfolk crossed over the county-city divide in many cases, with the country cousins and city cousins visiting each other on special occasions such as a birthday dinner, a homecoming, a birth or a funeral. Cabinet cards came home from the wondrous Cotton States Exposition and were tucked into the bureau.

The country cousins packed the buckboard with hampers and baskets of fresh corn, okra, tomatoes and watermelons for the folks in town. The town folks brought beautiful clothes that would fit and do just fine for the children. And, many times there was a sweet card with a picture of a niece and a little something inside the envelope.

These visits underscored the economic, educational and cultural differences between the two worlds. From the pioneer beginnings of Gwinnett County and the unbridled, adolescent growth of upstart Atlanta, the city and county families kept an occasional eye on one another. 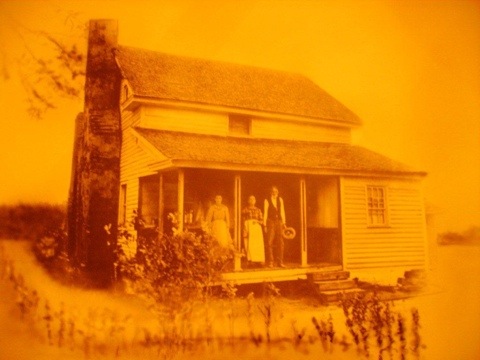