In 2009 the Carmel PTA marked my retirement as principal of Carmel Elementary School with a reception and unveiling of the oil portrait that hangs in the school. As the first principal of the new school that opened in 2000, I was honored that they wanted to commemorate me and sat for the portrait painted by Shane McDonald of Shane McDonald Studios in Marietta, Georgia. Because having a portrait painted is such a once-in-lifetime sort of thing, Mary and I decided to have him do a large version that hangs in our home. That was in 2009. I always intended to have Shane paint a companion portrait of Mary. The years rolled by and…no portrait of Mary. Life kind of got busy and interesting along the way.

The unfinished business of having Mary’s likeness painted nagged at me. After much cajoling, I finally convinced her to sit for Shane in the spring of 2013. I did not know until recently that Mary had fallen in love with the White House portrait of First Lady Grace Goodhue Coolidge. She had first seen the portrait at the age of eight when she visited the White House with her parents, Sara and Dave Donley in 1961. She remembers that she was struck with the beautiful white borzoi of the Coolidges that was posed in the portrait with the elegant Mrs. Coolidge. Mary agreed to sit for her portrait if Brody Green, our English Bulldog, would co-star in the portrait.

Four years later, the new portrait will be joining our household. Mary, Will and I enjoyed a visit to Shane McDonald’s studio to view the portrait, see framing ideas and give final approval. I think that it captures Mary and Brody beautifully. Shane has done a marvelous job with the portrait. We hope Brody approves.

I include below the 1924 portrait of Grace Goodhue Coolidge that Mary remembered from a day or two ago at the White House. It was painted by Howard Chandler Christy and includes Rob Roy, the Borzoi. I believe that it hangs in the Red Room. Mary and I checked it and reviewed it with Shane before they sat for him. I include a photograph of Shane McDonald signing Mary’s portrait in oil in his studio below. The portrait of me by Shane McDonald is below as well. 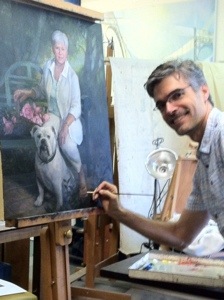 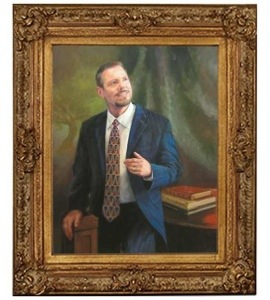