Back on November 1, 2011, I wrote the following in a blog entry. I was unable to finish writing what I had planned due to my health issue that put me out of commission for a month. One month turned into two, with a threat of the delay becoming three months. A friend chides me when I leave my blog unattended for too long. True to my motto, Carpe Diem, I am returning to my blog to “Seize the Day!”

I first visited the Biltmore Estate in 1967. For nearly a half century I have enjoyed visiting and sharing the experience with family and friends. It has been the scene of memorable events in my life. As I have learned more of the Biltmore story, I have conducted research that has been an incentive to travel. Finding other people that shared my Biltmore and Vanderbilt passion has been a most enjoyable and rewarding surprise. I have made wonderful friends who share in what we call “Biltmore-itis.” I will be adding to this story line over the nest few days.

Tomorrow: A persuasive fourteen year old wheedles his parents into loading up the 1965 Pontiac Catalina and taking a pre-interstate road trip to Western North Carolina “to visit a real castle!”

Back in 1967, I used to either spend hours before the television, eating Reese’s Peanut Butter Cups and drinking a coke while engrossed in my favorite programs, or spend hours reading a novel or a volume of Compton’s Encyclopedia, or best of all a combination of the above. I still remember the large, braided, hoop rug and the console black and white TV. Back in the early days of television, those polished consoles were revered pieces of furniture. Almost shrines in homes of the 1960s, these console televisions were important monuments to culture. Members of the family were photographed in their “Sunday Best” with the console television included in the picture.

My father knew that too much television would either make me go blind, or curdle my brains, though. There was a set bedtime, even if I was right in the middle of a program. No excuses…

Around 1967, a ridiculous television sitcom, “The Pruitts of Southampton,” premiered with the indomitable Phyllis Diller cast as an impoverished upper-crust aristocrat, reduced to economizing in her palatial home. She would appear outside her fabulous “French chateau” with her long suffering butler in tow. The plots usually centered on wacky attempts to carry on her socialite lifestyle while being financially broke. Eating cans of tuna and hamburgers figured into plot lines. Of course, Phyllis Diller’ comedic talent saved many a lame plot. The plots meant little to me. The exterior film footage that captured the huge house with its stair tower and many sculptural pinnacles captured my imagination. It wasn’t long before I found out that it was a real house with a name, Biltmore, on an estate in the United States. Finding this information required research. My sources were actual books, periodicals, and reference books. There was no computer search for my information. Information in hand, I realized that a visit to Biltmore was no impossible dream. In fact, it was close to where I lived. It was in North Carolina. This palatial home was also the location of many Chevrolet commercials that aired in primetime television. It wasn’t long before atlases and road maps were being quietly consulted for the location of Asheville, North Carolina. Promotional strategies were formulated.

There were a couple of hurdles that I would have to overcome with my parents if I intended to get to this Biltmore. My father could not tolerate Phyllis Diller, so it was impossible to get him to watch the show for its Biltmore footage. My mother and father believed that out of state trips were invariably to Florida, not other states. I had a big sales job in store for me.

There were two possible approaches. Fall was a great time for road trips into the Smoky Mountains. The ’65 Pontiac Catalina could use a good road trip. The third and unstated good reason for the trip was that it would finally shut me up. Parents appreciate such reasoning.

Interstates were not completed to Asheville in 1967, so trips through the mountains would be necessary. There was no discussion of spending the night, so an early departure around 4:00 a.m. was necessary. Of course, a picnic hamper of fried chicken, potato salad, deviled eggs, biscuits, and fried fruit pies was essential. After all, we could picnic from the car trunk on the side of the road someplace. There were picnic spots all through the mountains. Maybe the Vanderbilts would let us picnic somewhere on the huge estate.

My selling campaign came to an end with success on my part. It was decided. Now, we just had to get ready for the day!

Tomorrow, or next month: Arrival at Biltmore House and Gardens, October 1967
The photograph that accompanies this blog entry is circa 1976, not 1967. 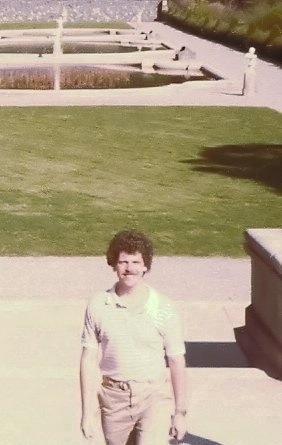