In 1984, Mary Donley Green and I were thirty years old and were new parents. We were both school administrators, had a new home in Forest Hills subdivision in Lawrenceville, Georgia, and were enjoying our young married lives.

One of our favorite pastimes was watching VHS tapes of our favorite soap opera, “Days of Our Lives.” I enjoyed working out at the gym after school and coming home to Mary’s delicious meals. Mary was a creative cook and could dish up a tasty taco pizza or Quiche Lorraine. We would sit down to watch our recorded soap at TV trays.

We used to take a home delivery of The Atlanta Journal newspaper and a mail subscription of TV Guide Magazine. It would appear that one of us discovered that the new actress, Kristian Alfonso, who was cast as Hope Williams in DOOL was going to appear at the opening of a fitness center below Atlanta in Morrow, Georgia in a few days. We just had to go see her as she was so beautiful and was Alice Horton’s granddaughter and Doug and Addie Horton Williams’ daughter on the show. Besides, she was getting romantically involved with that close to being a “hood” Bo Brady! He was a biker, heaven forbid!

Although Mary had just given birth to our firstborn, Evan, we decided to drive down in the new Camaro Z28 CFI to see this new actress. An image of Miss Alfonso with MPG is attached to this article.

Kristian Alfonso was about eighteen years old in the picture and had just taken the part of Hope Williams after a professional figure skating career. She was vivacious, outgoing and charming, much as she appears on-screen to this day. She is still quite beautiful and continues to be an important part of the cast on “Days of Our Lives.”

“Like sands through the hourglass, so are the days of our lives.”

Mary was very kind to photograph Kristian Alfonso and me. 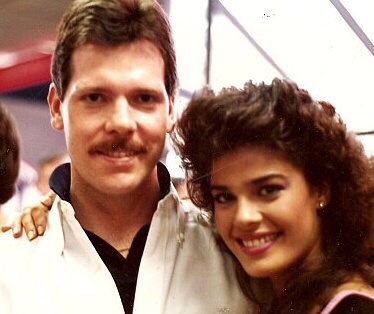 2 thoughts on “My Brush with a Starlet”